There's something about the vicarious experiencing of another's pain that's riveting to us. I usually don't mind the sight of blood but also like to know if the story ends well prior to viewing an especially troubling photo or reading a story like the one I recount below. Yet, perhaps because I'm doing a lot of drawing for a couple projects these days, I'm also trying to learn how to draw things out in their proper time. So no cutting the story short and peeking ahead - pinky promise?

On the wall above the coffee maker in the college sculpture shop I used to supervise, for a couple of years at least, my at times inappropriate humor was on display via this faux-vintage sign, bought from a street vendor on 53rd St. in NYC: 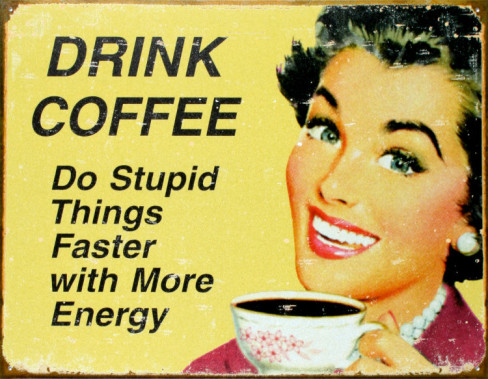 Until my first day back from summer break in 2011, that is. First day. New school year. Alone in the shop a few days before students would begin classes. Another fresh start. I scan office with new eyes. I view sign. I begin to have an internal conversation with myself.

Sure, it causes some people to smile, but if your students ever got seriously hurt in the shop, how would the sign be viewed then? Perhaps you'd be accused of not taking student safety diligently enough. Maybe you ought to take it down. Better safe than sorry. No laughing matter. Inappropriate. Yeah, take it down. It's time.

And so I did - I took it down, folded it up, and tossed it in the trash, much to the later dismay of my wife, who says she would've put it in our kitchen at home, between the Mr. Coffee and the knife block, I suppose. Next task: clean and organize. First thing to do: cut up some old wood materials left out behind the shop that no one'll ever use and toss 'em. What shall I cut them with? Snaps fingers. The band saw.

Now, a wood-cutting band saw is not nearly as menacing as the table saw, jointer, radial arm saw or most other machines that cut wood. It just isn't. It's not a loud machine. All the force at the point of contact is downward, so as long as the wood you're cutting has a flat, stable base, there's almost zero chance of the material shooting back at you violently or doing anything else unexpected and scary. You just need to be very careful to keep your fingers (or sleeves, long hair) away from the blade. But the band saw's innocuous nature is a tendon easily severed, so to speak. Once you've lowered the blade guard, limiting the amount of "exposed blade" to just above the height of the material you're about to cut, its feigned innocence invites you to lower your guard as well.

Those who can't stand the sight of blood, even if only in their mind's eye, should stop reading now, although, spoiler alert, I still have all ten digits. On my feet, anyway.

Whenever I've pointedly asked myself, I've stubbornly taken the fifth about the why I decided the band saw's table needed to be wiped off.  I mean, sure, it was dusty after finishing my task, but so what? And I also have plainly and repeatedly remained mum when questioned with my follow-up's: why not turn the saw off and use a hand broom and dust pan to sweep off the dust? Why, oh why, use my hand? With the saw running? Can I answer me that??

It was a kind of "wax on, wax off" Karate Kid-in-training type motion I was making, from the back side of the saw - a circular, counter-clockwise swirl, palm flat on the table, making a pretty, Franz Klein-inspired swish through the dust, when the pointer finger on my right hand contacted the blade and discovered it was no match for teeth that can chew through wood. The moving steel blade just missed the last interphalangeal joint but sliced raggedly about a third of the way through the digit behind the visible part of the nail before my cat-like reflexes 'waxed off'.

After a brief but noteworthy bout of swearing, I wrapped my finger in paper towels and used some more to wipe up the florid patina besmirching machine and floor, turned off the saw, the computer, the lights, and hopped into the truck.

On the way to the ER, I called my wife.

"What's up is I cut my finger on the band saw and I'm driving myself to the hospital."

"Nan, Seriously. I'm on my way to the hospital. It's not that bad (I was speaking relatively), but I wanted you to know."

And so it went. Long story 'cut' short, what looked pretty bad at first was expertly mended and, thanks to flanking but not contacting bone and tendon, not to mention thanks to my cat-like reflexes, I was literally back at work later that day, sporting a nice, bright, orange bandage. I even took a picture that afternoon of the actual pattern of dust still left on the saw's table. 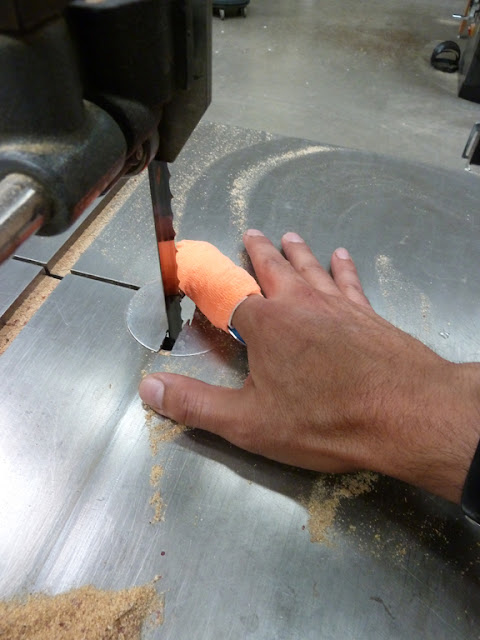 - My finger has made a full recovery; no loss of feeling in the affected area.

- The shop's Mr. Coffee is still percolating daily, yet the focus on student safety, now in the able, fully five fingered hands of my successor, is still the paramount concern.

- I now make a distinction between a domestic house cat's and a wild tiger's reflexes.

Oh, and just so you know, I could have extended this account with what occurred as I was being worked on in the hospital, but some things are better left unbled. 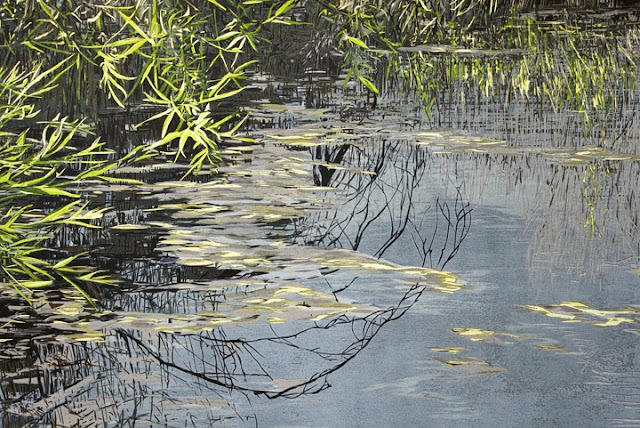 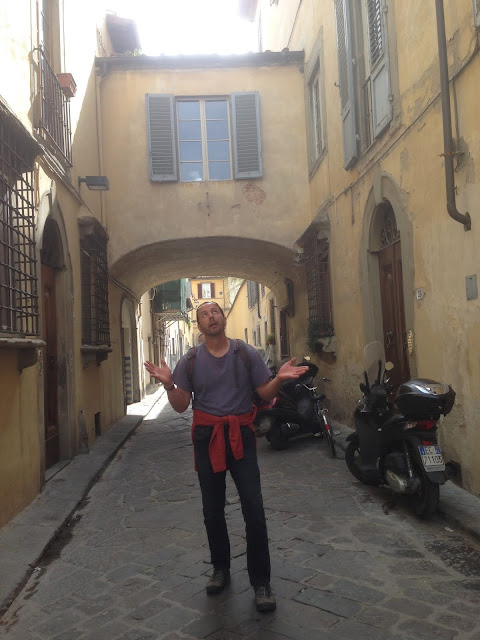